Mstdfr (Arabic: مستدفر) is a Middle Eastern geeky podcast spoken in "Arablish". Every week, Ammar and Rami host different regional guests to talk about various topics including: current affairs, culture, technology, media, challenges facing the new Arab generation, and everything in between. 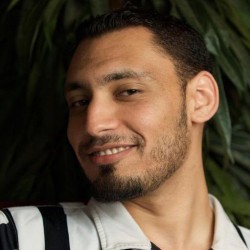 Today’s episode is different and special, it’s different because it’s in english… and it’s special because we got to sit with a very talented writer who wrote one of our favorite Disney films titled Bridge to Terabithia that was based on a novel written by Katherine Paterson and was published in 1977. Screenwriter Jeff Stockwell’s produced credits also includes The Dangerous Lives of Altar Boys, Wilder Days, The Ottoman Lieutenant, and Disney’s A Wrinkle In Time. He has done uncredited writing on projects including Percy Jackson & The Olympians: The Lightning Thief, Rise of The Guardians and The BFG.

Jeff spent 2016 as a contract writer at Pixar Animation Studios. He has worked on many independent and studio projects, now in various stages of development. They include The Miraculous Journey of Edward Tulane with Black Label Media, The Eighty Dollar Champion with MGM, and The Curious Charms of Arthur Pepper with Fox Searchlight. Jeff is also one of the instructors at the Screenwriting Lab at Film Independent which is where he met Ammar in a screenplay workshop in Abu Dhabi. We got an opportunity to sit down with him and talk about writing and the film industry, we had a great conversation and we are sure you will enjoy it and maybe lear a thing or two if you are an aspiring writer.